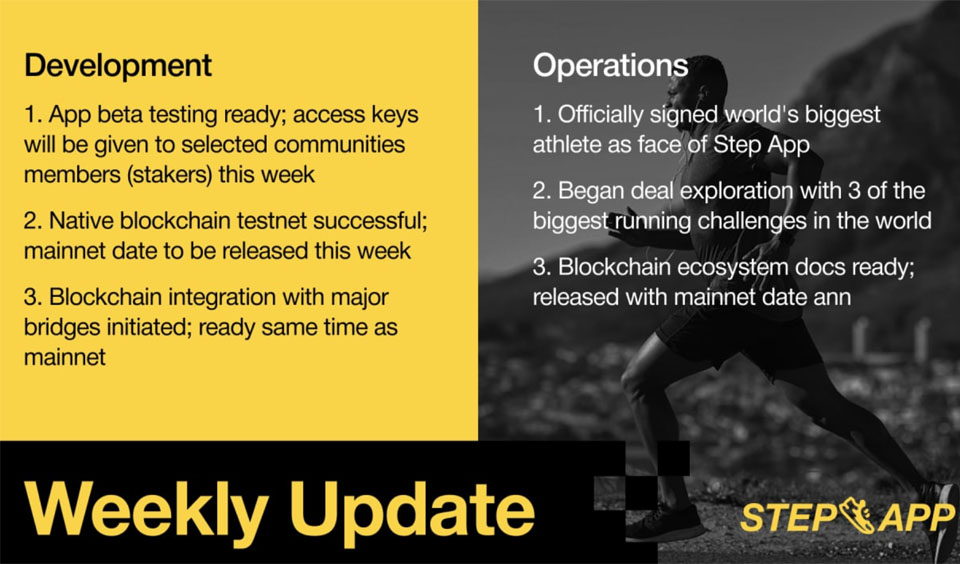 The socialize-play-compete-and-earn Health Metaverse, Step App, has released a new weekly update with some big news. The recently released update offers insight into the current status of the developments and operations in the metaverse.

Highlights of the Development Update

The tireless work and effort of Step App are already paying off as the team announced that the App beta testing is ready. The access keys to the beta testing will be released to selected community members during the week. It is worth mentioning that the selected members will be from stakers on the platform.

This weekly update provides insight into the status of the development and operations. 👇 pic.twitter.com/byyZwC7XN1

Secondly, the team mentioned in the update that its native blockchain testnet was a success and the mainnet date will be released in the coming week. The third update on the development area is the initiation of the integration of blockchain into some major bridges. These are ready at the same time as the mainnet.

Highlights of the Operations Update

According to Step App, the team has officially signed the biggest athlete in the world as the face of the Step App. It has also started different deal explorations with three of the biggest running challenges in the world. This will bring more health-oriented activities to the game metaverse.

Additionally, the platform mentioned that the Blockchain ecosystem documents that it has been working on for a while now are ready. These documents will be released alongside the date announcement of the mainnet. The community members are therefore advised to keep a tab on the social media handles of the game platform to get the latest on the release date.

Step App also mentioned that the team has waited for a macro relief just like now and also reiterates that timing plays a significant and strategic role in the launch of its product.

Step App is a metaverse that lets users turn their fitness goals into social joy, friendly competition, and income. The platform is powered by the leading technology in metaverse, blockchain, and augmented reality. Users can transform what they love doing into making extra income by exercising, farming, playing, and socializing to earn NFTs.