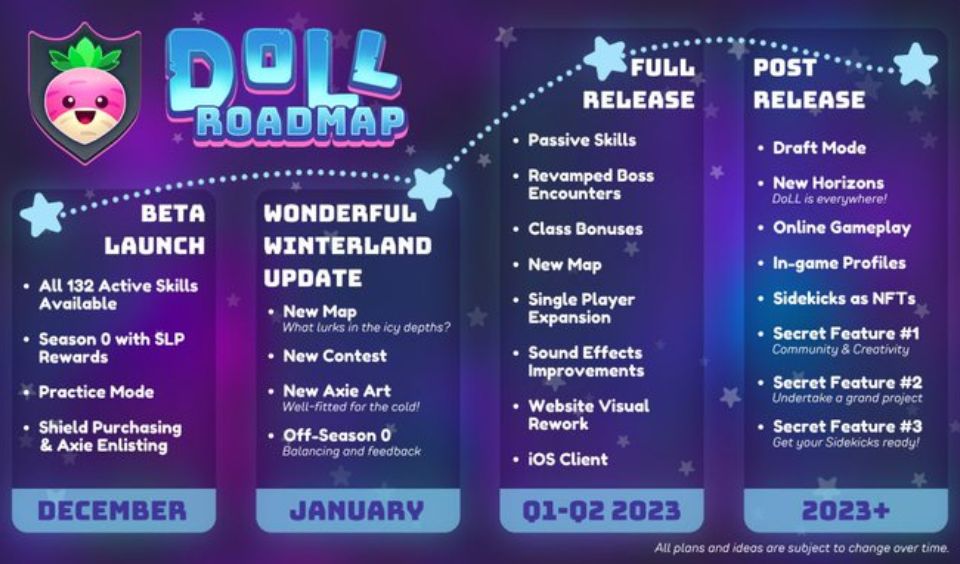 Axie DoLL (Defenders of Lunacian Land) has released an updated version of its roadmap. This document includes completed projects and milestones in 2022. It also features the team’s plans for the coming month. There were also stats proving that the project has made significant progress since launching.

🛣️ DoLL Roadmap 🛣️
Many thanks for everyone who has been part of our journey so far. We have alot of exciting features ahead of us. We are here for the end game💍

Details of the Axie DoLL Roadmap

The Axie DoLL roadmap promises the addition of a new map in January. There will also be new content and Axie Art in the Wonderful Winterland Update. Within this first month of the year, the team will issue the full release of passive skills.

In addition to that, there will also be a revamp of Boss Encounters and addition of class bonuses. Meanwhile, players should expect more immersive experiences as Axie will expand the single player mode. Furthermore, sound effects will be upgraded to ensure that playing becomes more captivating.  The improvements will not be limited to gameplay, as there will be a rework of the website and launch of an iOS client.

After the release of Season 0, the team will launch the Draft Mode. Also, they will expand the game’s reach to enable more users to join the adventure. Players will now be able to play online and create in-game profiles.  In no time, you will be able to mint sidekicks as NFTs.

Meanwhile, the press release hints at three upcoming secret features. Each of them will serve the following purposes:

Meanwhile, the second edition of the Axie DoLL eSPorts qualifier is set for January 15th 2022. This is event features a $1,000 prize pool that will be shared by the top 16 players. All interested candidates must join the Community Gaming Discord Channel. There will be five stages of this contest, namely: Rounds 1 – 3, semifinal and final.

There will be 32 players, that will be shared into 8 groups. Each team can only choose 1 representative. In addition, your contestant can only change the Axies they will use to compete between rounds. Drafting begins from the semifinal stage and players’ scores will determine the process.

Users with the highest scores will select where they want to ban. Meanwhile, players must use 6 of the 8 skills they pick in the preliminary stages. However, the top two participants must use all 8 in the finals.