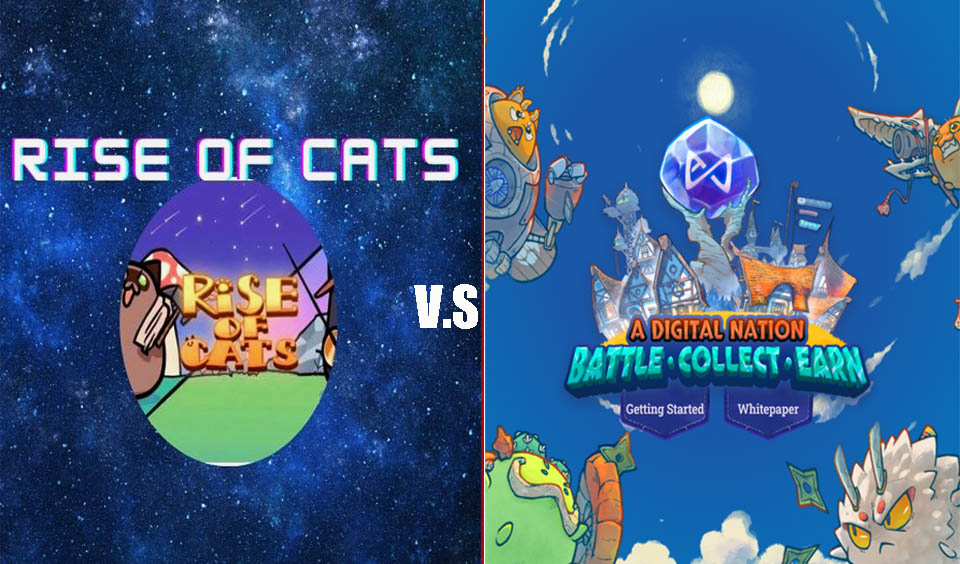 Axie Infinity is arguably the most successful NFT blockchain game within the past two years. With innovations in the NFT industry, many new NFT projects are coming up to compete with leaders in the industry.

One of such new projects is the Rise of Cats. Rise of Cats is a new blockchain-based NFT game that was launched by CatCoin. It is a fast-rising NFT game that has attracted the attention of many players and investors alike.

At a glance, both Axie Infinity and Rise of Cats share a lot of similarities apart from being NFT blockchain-based games. In this post, we will look at these two games and see how they compare in terms of offerings to players and investors, gameplay, and in-game assets.

It offers players a new gaming experience where players can collect and breed NFT digital pets, known as Axies. Each Axie has unique features covering a combination of four characteristics and six body parts.

Also, each Axie features a unique ability and appearance. Players on the platform also earn rewards when they play the game. They earn $SLPs (Smooth Love Potions), which they can sell for real money or use to breed new Axie.

Rise of Cats is a new kid on the block. It is an NFT tower defense game that lets players use in-game NFT cats to battle with others. Players can also upgrade these NFT Cats with CatPay. There are forty different NFT Cats with each having special abilities, five attributes, and six rarities.

Players in Rise of Cats can also earn money while playing the game, just like in Axie Infinity. The universal token used in the Rise of Cats metaverse is CatPay and it is mined in-game. Gamers collect Catpay when they play Rise of Cats and they can withdraw and trade their NFTs in the marketplace.

Both Axie Infinity and Rise of Cats have similar gameplay where the players pit their pets against other players in battles.  Rise of Cats uses an online co-op and matchmaking mechanism that allows players to create a team of 5 NFT cats to launch an offensive or defensive attack against the enemy.

Players must beat the enemies to earn more CatPay. Therefore, instead of the standard play-to-earn, it uses fight-to-earn to engage players. Players can also pay to participate in tournaments and compete against other players to earn the CatPay prize pool.

Axie Infinity also has an element of tournaments to its gameplay. Players on the platform can also participate in different tournaments organized by the core team or third-party sponsors.

NFTs are an important component of any play-to-earn games and both Axie Infinity and Rise of Cats use this optimally. Axie Infinity has two popular tokens – $AXS and $LSP. $AXS is an in-game token that players can use to claim rewards after staking their tokens. They also need it to participate in the major governance votes and play the game.

Players can also earn the token while playing different games in the Axie Infinity metaverse and via user-generated content initiatives. The $SLP has been introduced to prevent hyperinflation of Axie, which means there is a maximum number of times that holders can breed their Axie before it goes sterile.

The $SLP is used for breeding Axie and can be earned through the game in the play-versus-player arena. The token used in the Rise of Cats metaverse is the CatPay. It is a universal token for all activities in the game metaverse. Players can earn it by playing games and can also be used for upgrading cats in-game.

It can also be used to unlock different game features and pay for tournament entry fees. Players get to mine CatPay tokens from the game. Rise of Cats seems to have streamlined its tokens and focus on a single currency for all its transaction.

While Rise of Cats is still in its early stage in the NFT game industry, game analysts believe that it will give Axie Infinity a run for its money. For a start, they both have a similar theme.

However, the gameplay of Rise of Cats is more immersive and more fun. This will surely attract players and when the investment starts yielding, it is likely to compete strongly with Axie Infinity.