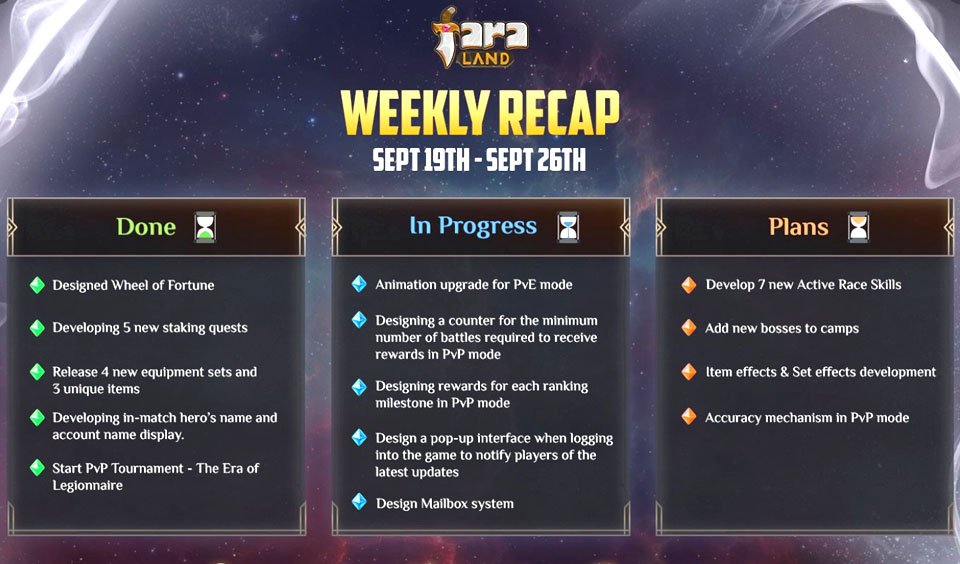 The multi-player RPG NFT-based game on BSC, Faraland, has released a new weekly update covering completed projects, work-in-progress, and upcoming projects. Here are the details of Completed Projects according to the game platform.

🔥 Lots of exciting features are waiting ahead

🎉 And stay tuned for our developing plan!!

Faraland also released four new equipment sets and three unique items, which launched on September 15. It mentioned that the set items in the “Lady of the Lake” feature will not come with sub-weapon and main-weapon. They will appear within the Crafting feature.

These quests will give more opportunities to obtain tickets and use the Wheel of Fortune.

PvP Tournament – The Era of Legionnaire

The PvP Tournament – The Era of Legionnaire started on September 14 and will end tomorrow, September 21. The season has a total prize pool of 26,700 $FARA and other in-game assets, including Soul Stones, Demon Essence, Aqua Crown, Dark Butterfly, Rotten Meat, Chaos Oculus, and others.

Highlights of Projects in Progress

Faraland currently has several designs and projects its team is working on to improve the gaming experience on its platform. These work-in-progress projects include:

Faraland is not resting on its oars as the team is consistently working to deliver an exceptional gaming experience to its users. Some upcoming projects players can look forward to on the game platform include: