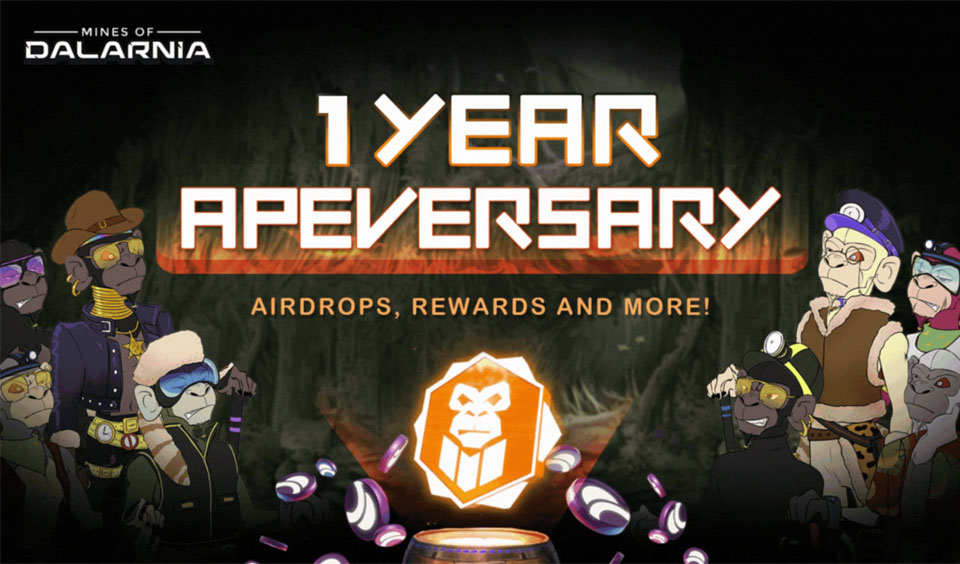 A blockchain action-adventure platform-mining game platform, Mines of Dalarnia, is set to celebrate the first anniversary of its Mining Ape NFT Collection with an exciting event. It is worth mentioning that the Mining Apes Collection was launched on October 25, 2021, and over 3000 Ape NFTs were minted during the event.

Mines of Dalarnia game has revealed that it will kick off the first birthday celebration of the NFT collection on October 25, 2022, with a snapshot taken. According to the platform, every holder of an Ape at the period of the snapshot becomes eligible for the DAR airdrop. Each Ape NFT is eligible to earn a minimum reward of 100 $DAR.

It's been a long wait.
But great news, Dalarnian Ape Holders! 🦧

We're happy to announce an upcoming event to commemorate the 1-year anniversary of the Mining Ape NFT Collection and more. 😱

Uncover the gems that come with holding on to the #NFTs ⬇️:https://t.co/X0SyVgLODG pic.twitter.com/h3Sl5VrgqY

More Details on the Distribution of Rewards

Mines of Dalarnia said it will credit addresses for multiple NFTs. For instance, a user who purchases ten Apes today before taking the snapshot on October 25 will receive 1000 $DAR.

On the other hand, a user who had held an Ape for a whole year and buys three additional Apes before the snapshot will get 800 $DAR. Eligible users can check and claim their airdrop rewards after the snapshot on the platform’s rewards portal.

What More to Expect from Mines of Dalarnia

The game platform has also revealed it is not done with surprising its users with exciting benefits. Mines of Dalarnia said it will introduce the Ape Exclusive Quests in the metaverse in the first half of 2023.

The quests will offer Mining Ape NFT holders the chance to enjoy new benefits. The team will reveal more details about the new quests close to their launch. However, the team released some initial aspects of the Ape Exclusive Quests.

The Metaverse – Use Cases and Benefits