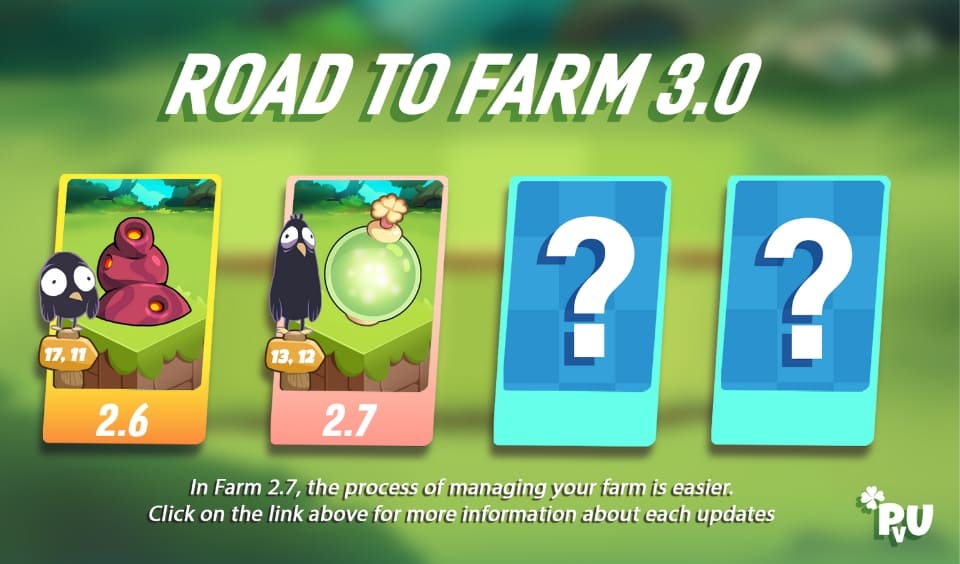 Much has been said of the Farm 3.0 from Plant Vs Undead. Earlier on, the game gave an insight as to what to expect from the gameplay update. Despite the update, there was no concrete information as to the actual release of the game. With this new information coming from their Telegram Page, it seems as though the target date of release is the 1st of January 2021. Here is the latest on PVU’s Farm 3.0 launch details.

As mentioned earlier, PVU anticipates January 1st for the release. In this update, Plant Vs Undead is promising a complete game overhaul of the current system. The first major changes is stopping the Light Energy (LE) rate from increasing every Friday. This will help gardeners to farm even better. Like in earlier posts, there will be loads of mini games in Farm 3.0. From the indications, this new update will make waves upon its arrival.

While everything is poised for this new release, it seems as though PVU is still doing some finishing touches. This is quite understandable, considering the major systematic overhaul. Therefore, there will be a server maintenance of the PVU platform. This server maintenance will start by 2 PM UTC on the 31st of December. It will then end on midnight by that same 31st. Following the completion of the maintenance, update of the Farm to 3.0 will take between 24 to 48 hours.

By implications, Farm 3.0 Launch should occur between the 1st or 2nd of January 2022. That is if everything goes according to plan. Although PVU did not state it exclusively, it seems as though Farm 3.0 will launch immediately the update is complete.

Plant vs Undead (PVU) is a blockchain-based game where you have to protect a unique mother tree from attacks by the undead. The game is set on Planet Plant, a world where Plant and animals lived in harmony until a meteor full of zombies struck and the “Undead” invaded. The game aims for you to harvest Plant and build an undead and weather resistant farm.

PVU is has several rounds of play. In each round, you must protect your mother tree using 8 unique plants. You will strategically position your plants in an effort to increase their power against the attackers. If you are successful in killing the undead, you will earn energy points or Light Energy (LE). You can use these points to reposition or upgrade your plants. Also, you can exchange them for PVU, the game’s native token or for newer tools to upgrade your plot of land.

Top 5 Blockchain Based Games with High Prospects in 2022