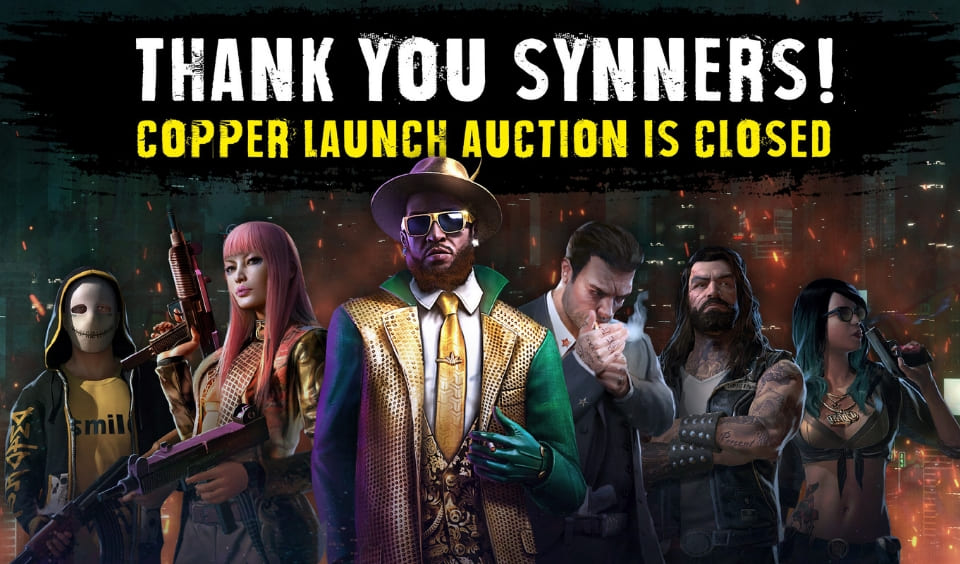 Three days ago, Syn City had their Copper Launch Auction. Following the completion of that event, Syn City is issuing various updates. This includes updates on the copper launch auction and its next steps. Part of the next steps include plans to launch the #MafiaMetaverse.

The game is also changing its ticker to SYNR. This change will further increase the recognition of the Mafia Metaverse. Details of Syn City’s next plans was announced via the Syn City Medium page. Here are the details of the auction updates and next steps.

Details of the Copper Launch Auction and Staking Updates

Within the 3½ days of the auction, Syn City completed its IDO on all four platforms. In that period, it raised the sum of $1.1 million. It was able to sell 55,000,000 SYNR at $0.02 per SYNR. The amount available for the IDO represents 5% of the total supply of SYNR.

Below are the milestones from the Syn City IDO:

Following the end of the copper launch auction, one of the next step is the $SYNR staking pool. The game will soon unveil details of its staking pool. Once this pools launches, Synners will be able to deposit tokens and earn rewards. Syn City will release details of the staking pool their official announcement channels this week. Once they make this announcement, the staking event will go live.

The $SYNR token launch was a success. As a result, Synners were asking where and when the token will be listed. In this regard, Syn City’s native token will be listing on Uniswap. Uniswap is its choice because this is a globally recognized decentralized exchange. Announcement of the official listing will take place on the 25th of January. The time is not yet set, but it will be in the PST timezone.

SYN CITY is the first-ever Mafia Metaverse. It displays a representation of the world of modern syndicates. SYN CITY is free-to-play and play-to-earn blockchain game. It makes the Metaverse more accessible by introducing the revolutionary MAFIA as a DAO (MaaD) system. Players can grind in daily events, PvE, PvP, and Syndicate events such as cross-chain tournaments. The game is the products of a team of industry experts from top brands. This includes Disney, Ubisoft, Roblox, EA, Gameloft, Google, Yahoo and Twitter.