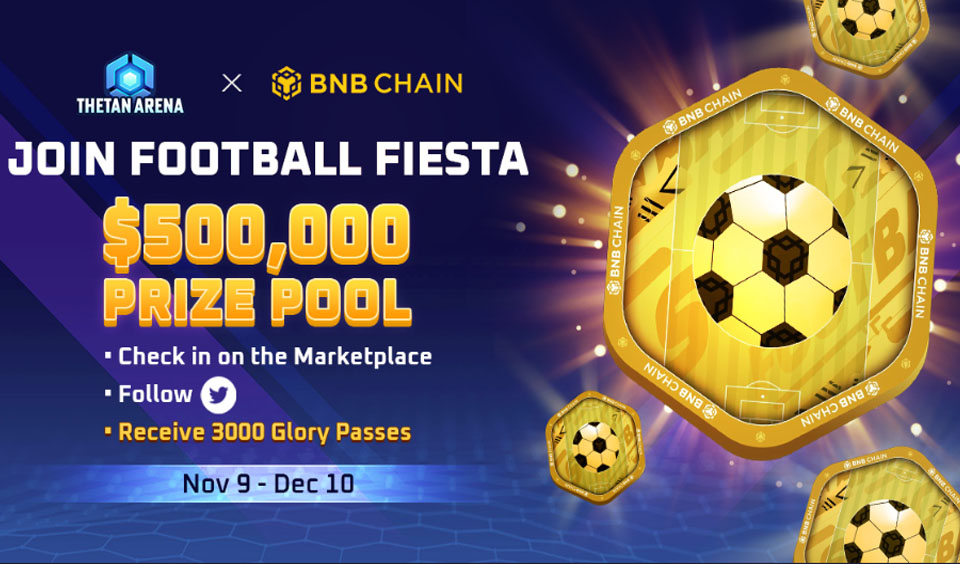 The first MOBA e-sport game on the blockchain, Thetan Arena, has called on its community members to join Thetan Arena in the BNBCHAIN Football Fiesta as it celebrates the biggest tournament of the most-loved sports globally.

Participants in this event only have to predict the World Cup matches with a Glory Pass to earn their share of the $500,000 prize pool. The event starts on November 9 and runs until December 10. According to Thetan Arena, its platform with other partner projects of BNB Chain will issue 120,000 Glory Passes among their gaming communities.

Walk with Thetan Arena in Football Fiesta by @BNBCHAIN, predict the World Cup matches, and earn your share of a 💲500,000 prize pool

Every participant in the Football Fiesta has an opportunity to win from the prize pool and access other numerous perks from the partner projects during the campaign.

How to Claim Glory Pass from Thetan Arena

The platform has 3,000 Glory Passes to distribute to its community member from November 9 to December 10. To get a Glory Pass, players must fulfill some requirements.

As mentioned, the prize pool for the World Cup Match Predictions is $500,000 and Glory Passes. Glory Pass holders can use a Glory Pass to predict once per match, and each prediction round starts twelve hours before the match and ends ten minutes before it starts.

The prediction will hold on BNB Chain DappBay for the last four matches of the World Cup. These matches are two semi-finals on December 14 and 15, one third-place playoff on December 17, and the Final on December 18.

More Benefits from the Football Fiesta

Thetan Arena participants in the Football Fiesta also have a 95% chance of getting an NFT Hero from Glory Box in addition to predicting the World Cup Matches. According to the game platform, each Glory Pass holder qualifies to receive a Glory Box from November 14 to December 14.

Participants can claim the Glory Box on the marketplace. Each Glory Box has a 95% possibility of unlocking an NFT hero. When you connect your wallet to the marketplace and enter your Glory Pass ID, you can get NFT heroes, which you can use in different Thetan Arena activities.

These activities include playing the Thetan Arena game, participating in special events, including Fusion and Hero Trading, and trading NFTs on the marketplace to acquire exciting benefits.