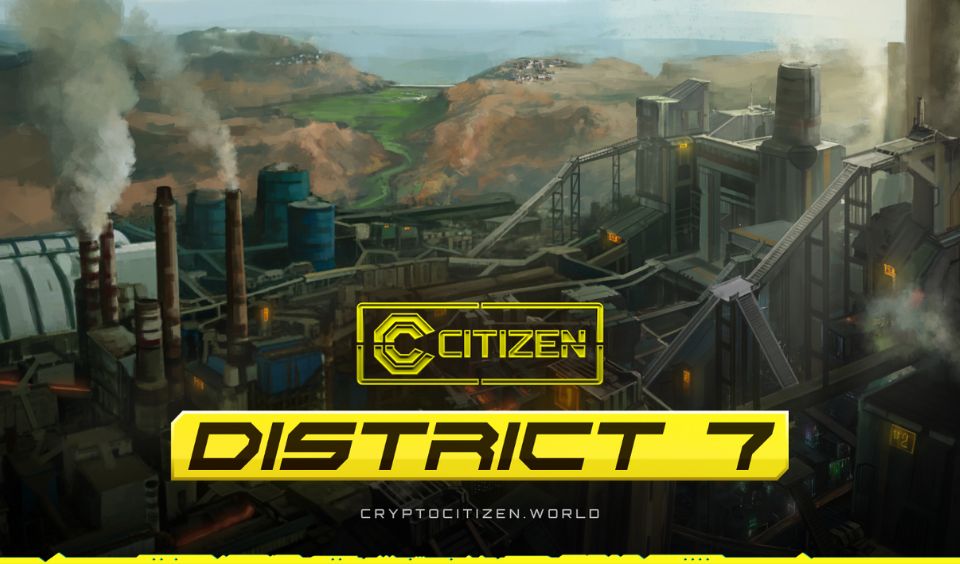 In its usual fashion, Crypto Citizen unveils the next area of its metaverse – district 7. Those who followed the series from 0, 10, 9 and 8 expect things to get better in this section. Well, this is not precisely the case. While the Whaleland may seem prosperous, it is still very dangerous.

You can work yourself to death in factories in run by the #Korpo syndicate, or try to rule the streets full of junk, metal sheets, and rusted iron😏

Behind the city lights lie factories, junk-filled streets, metal sheets and rusted iron. There are two layers to this place. They are so different that you would doubt that they belong to one section. Nonetheless, this remains home to the ordinary people of Metropolit. It is also the only place in the EtherVerse that maintains its original form.

All You Need to Know About the Crypto Citizen District 7

Like every region in Ether Islands, the Crypto Citizen District 7 has its story. This is the first place built after the settlement. It is a multi-layered city world that consists of two cities. In the higher part houses the affluent. On the lower deck are the poorest people who feed off the rubbish that falls from above. If you can get rich, you can move to the upper echelons.

Initially an ordinary town, it became overcrowded with people who were lured by the promise of a better place. Soon enough, these individuals got greedy with the expectations of quick access to wealth. In no time, there was not enough space or resources to satisfy everyone. People soon began to realize that they made mistakes by engaging in the journey. Besides not getting rich, they could not go any further.

Resigning themselves to fate, the residents tried getting jobs at local factories owned by the Korpo Syndicate. However, the owners of these manufacturing plans did not intend to make workers rich. As such, the inhabitants had to employ cunning and dubious means to meet ends. This is unexpected, considering they did not survive prior districts playing by the rules.

Whaleland is very different from other aspects of the Ether Islands. One of the reasons is its Soviet-like architecture which is also outdated. To solver the population issue, people build on top of house panels, as there is no additional land. The result is a series of very tall buildings that look very shabby. Every household owns a cat or dog as a pet, and you may see them patrolling the pavement.

This place is safer than the other districts revealed earlier. The reason is that the police force here actually does their job. If you want to have fun, you should check out the rooftops. However, you must learn to zip line your way across buildings.